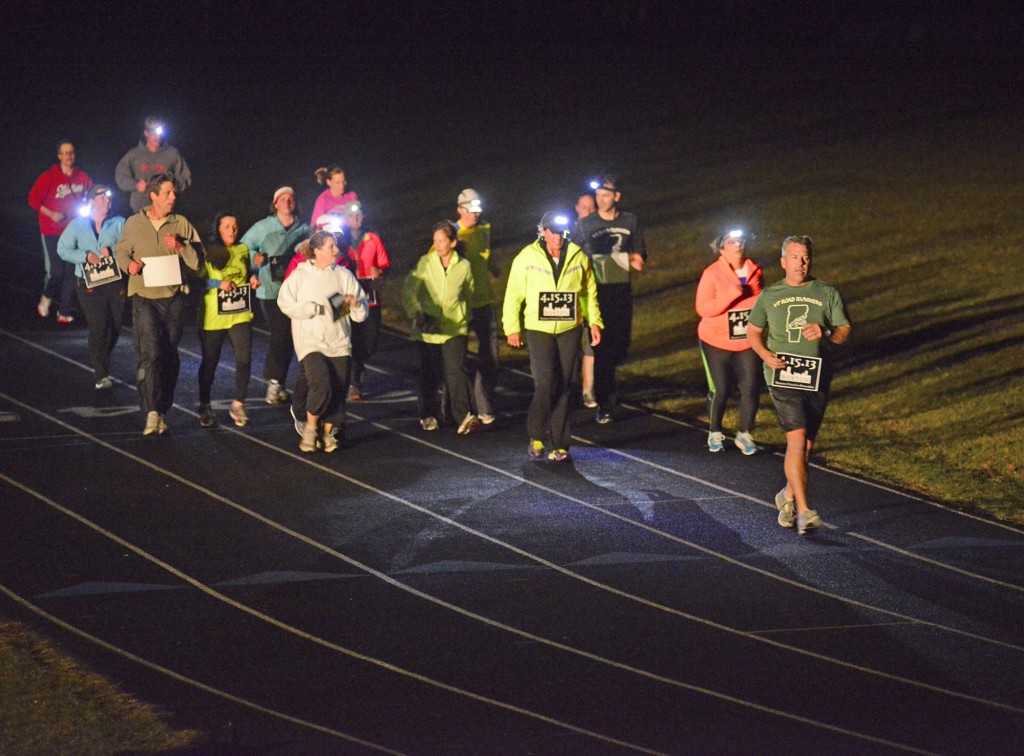 Stefan Hard / Staff Photo
Some of the 32 runners at a one-mile run to remember the victims of the Boston Marathon bombings circle the track Tuesday evening at U-32 High School in East Montpelier, where they also ran alongside April Farnham of Plainfield, who returned safe from running in Monday’s Boston marathon. Runners around the nation Tuesday also ran one mile to show their solidarity with Boston.

It’s looking like a cool day, then warming up through the end of the week, with a cooler weekend on tap at the moment, but these things change. There are signs of green, and signs that the Red Sox might be an okay team after all.

Forecast Discussion: The area is coming under the influence of high pressure, although we’re on its southern periphery. The center of the high will drift eastward today, from the James Bay across central Québec. Whatever sunshine we get will be somewhat counteracted by a cool northwesterly breeze that will become a bit more northerly as the day progresses. A cool night will follow as the winds subside. Exactly how cool depends on how fast the high clouds start to build in ahead of the next low pressure system, currently organizing over the panhandle of Texas. If not late tonight, then by tomorrow morning high clouds will be overspreading the region ahead of this system’s warm front. Some scattered showers will also be possible tomorrow in association with the warm frontal passage. Unseasonably mild weather will follow for tomorrow night and Friday, as strong southerly winds pump the warmer air in. It will be warm, showery and windy on Friday, before the system’s cold front brings cooler weather for the weekend.

Tweet
Pin It
This entry was posted in Vermont News, Weather. Bookmark the permalink.