Posted on March 6, 2014 by Rob Mitchell | Comments Off on Danby man charged with stealing from fire vehicles

Posted on February 10, 2014 by Rob Mitchell | Comments Off on Slick roads cause crashes around Rutland 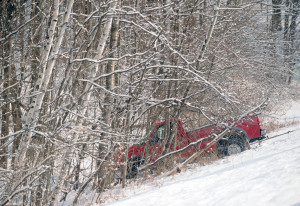 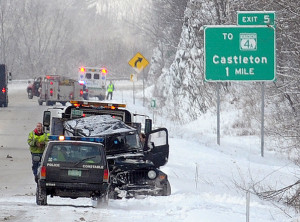 Posted on February 5, 2014 by Rob Mitchell | Comments Off on Police search for missing New Hampshire man near Fair Haven

Vermont State Police are looking for a missing New Hampshire man who may have been last seen in Fair Haven. Police said Robert P. Walker, 75, of Farmingham, N.H., was en route to visit a relative in Addison this week, but never arrived. Police said Walker is “believed to have left an unknown hotel in the Fair Haven area” at around 10 a.m. Tuesday. Walker is described at 5 feet 8 inches tall and 170 pounds, with grey hair and a bald top. He may be wearing a tan overcoat and was driving a 2005 white Dodge Caravan with New Hampshire plate 2090832. He is reportedly traveling along. Police also said Walker prefers “home style” cooking and is likely to eat at “a diner or Cracker Barrel type restaurant.” Walker was recently diagnosed with stroke-induced dementia, according to police, and may appear confused. Anyone with information on Walker’s whereabouts is asked to call Vermont State Police at 388-4919.

Artist Stephen Schaub to feature at Christine Price at Castleton

Posted on January 20, 2014 by Rob Mitchell | Comments Off on Artist Stephen Schaub to feature at Christine Price at Castleton

CASTLETON – Mixed media artist Stephen Schaub will be featured in an exhibit in the Christine Price Gallery at Castleton College Jan. 21-Feb. 21. An artist talk is scheduled for 12:30 p.m. Tuesday, Jan. 28, in Herrick Auditorium, and reception at 5 p.m. Thursday, Jan. 30, in the gallery.
Combining the aspects of painting, the techniques of photography and the presentation of works on paper, Schaub’s artworks defy conventional classification. His works reference the delicate, subjective nature of life and depict in-between moments and anonymous figures in scenes of hyper-reality.
After serving as a U.S. Marine in the first Gulf War and receiving the Navy Achievement Medal, Schaub went on to graduate from the Rochester Institute of Technology in Photographic Arts and Sciences. Having authored two collections of his artworks, he has been featured in numerous publications and shows both at home and abroad, including the showing of “Through a Glass Darkly” in Paris in 2004.
The Christine Price Gallery is located on the Castleton College campus in the Fine Arts Center and is open 9 a.m. to 5 p.m. Monday-Friday. For more information, contact William Ramage at 802-468-1266 or [email protected]

Posted on December 17, 2013 by Rob Mitchell | Comments Off on Gift of Life Marathon tweet timeline

Apparently Rep. Welch can't donate because he was in Afghanistan in April, putting him afoul of the Red Cross guidelines. #GOLM13

Some inspiration for the @GiftofLifeVT Marathon in Rutland today: http://t.co/3fNmIbz7BG Stop by and visit @RedCrossBloodVT #golm13

Good morning, Rutland. We have finally arrived at the big day. Look forward to seeing over 2000 of you at the Gift of Life Marathon. #GOLM13

"…I don’t think there are many places with the heart and soul that lives here,” http://t.co/JY4YW4QPHF #RutVT #GOLM13

Comments Off on Gift of Life Marathon tweet timeline

Gift Of Life Marathon about to begin

Posted on December 17, 2013 by Rob Mitchell | Comments Off on Gift Of Life Marathon about to begin 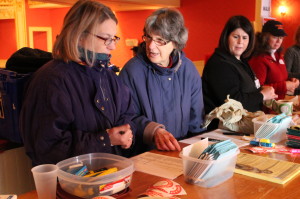 Rita Walker, second from left, explains some details to Alice Drislane at the registration table at the Paramount Theatre in Rutland. Walker, from Montpelier, is one of hundreds of Red Cross employees who have mobilized for the #GOLM13.

The day has arrived in Rutland. It’s clear, and at 9 a.m. the temperature is six degrees below zero. The breath is rising in clouds from people walking the sidewalks towards the Gift of Life Marathon in the Paramount Theatre. The city and county will need to mobilize to break the record of 1,968 pints in a single day.

People are starting to check in for their appointments at Paramount! No appointment? Walk-ins are welcome! #GOLM13

Comments Off on Gift Of Life Marathon about to begin

Posted on December 17, 2013 by Rob Mitchell | Comments Off on Will Rutland rise to the challenge? Blood drive today 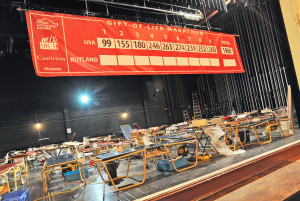 Comments Off on Will Rutland rise to the challenge? Blood drive today

Posted on November 7, 2013 by Rob Mitchell | Comments Off on Man charged for alledgedly punching car

WEST RUTLAND — A Rutland man faces a charge of unlawful mischief for allegedly using his fist to punch out a car headlight during a family fight, according to Vermont State Police.
Police say they were called to 23 Proctor St. at 10 p.m. on Halloween night for a family disturbance. At the address police say they learned that Gregory M. Eastman Jr., 29, had punched and broken a car headlight.
On Nov. 6, police issued Eastman a criminal citation to appear in Rutland criminal court next month.

Comments Off on Man charged for alledgedly punching car

Posted on October 21, 2013 by Rob Mitchell | Comments Off on Annual outdoor Halloween event in Castleton Friday

CASTLETON — Families can join a fun and educational Halloween campfire show led by students from Green Mountain College’s environmental education and interpretation program at the Edward F. Kehoe Green Mountain Conservation Camp on Point of Pine Road in Castleton, on Friday, Oct. 25, from 5-8 p.m.
The second annual Halloween Wildlife Festival and Jack-o’Lantern Hike at the camp’s Education Center is where kids will learn about the creepy, crawly critters that reside in Vermont and have a chance to get decked out in their costumes before the traditional trick-or-treat night. The 20-minute campfire program will run at 5, 6, and 7 p.m.
Other activities include a nature hike along a trail that’s lit by carved pumpkins, wildlife-related activities, face painting, and a photo booth. Snacks will include apple cider, caramel apples and other seasonal treats.
“The Education Center at Kehoe does a natural resources related event every month, and October is a perfect time to highlight the fun of Halloween while focusing on the wildlife that make it so special” said Alison Thomas, education coordinator. “This event gives families a chance to enjoy the season in a different way and to learn these animals may not be so scary after all.”
Admission and activities are free and open to the general public, and all ages are welcome. No registration is required. Costumes are encouraged, but not required.
The Edward F. Kehoe Green Mountain Conservation Camp is operated by the Vermont Fish & Wildlife Department. This event is sponsored by the Fish & Wildlife Department and Green Mountain College. For directions to the Edward F. Kehoe Green Mountain Conservation Camp, visit www.tinyurl.com/KehoeMap.
For more information about the event, contact Ali Thomas, Fish & Wildlife education coordinator at [email protected] or 802-371-9975.

Comments Off on Annual outdoor Halloween event in Castleton Friday