Weather conditions and reports for Vermont

Posted on April 16, 2014 by Rob Mitchell | Comments Off on Woman rescued from floodwater in northern Vermont 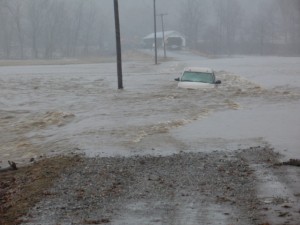 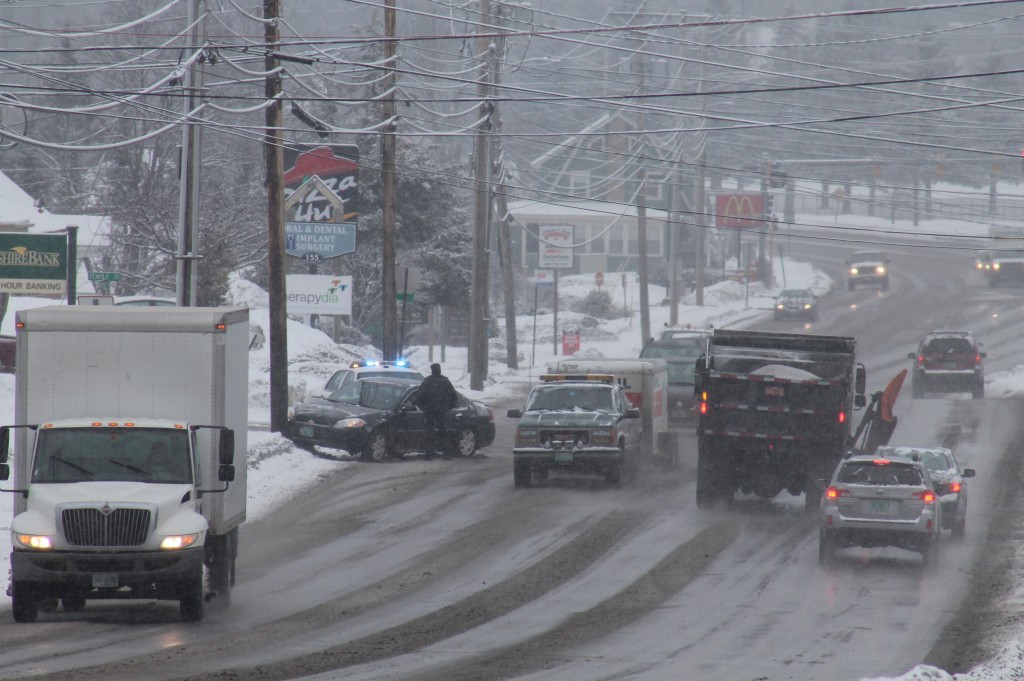 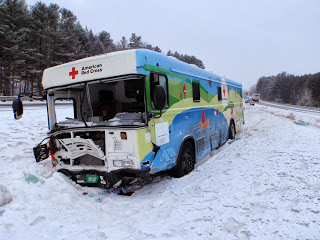 Posted on February 13, 2014 by Rob Mitchell | Comments Off on Snowfall beginning in southern Vermont 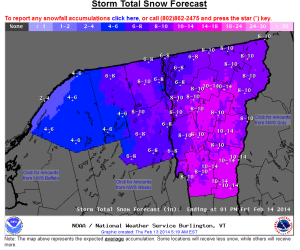 Winter storm moves into region; many closures and cancellations

Posted on February 5, 2014 by Rob Mitchell | Comments Off on Winter storm moves into region; many closures and cancellations 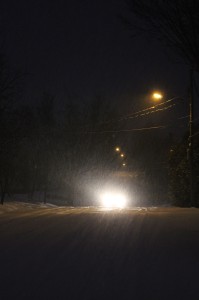 Here’s today’s forecast discussion from the Fairbanks Museum in St. Johnsbury: Low pressure that’s been moving out of the Tennessee Valley is consolidating near Washington, D.C. this morning. The center of the low should then rapidly move northeastward into the waters off the southern tip of Nova Scotia by about 7:00 PM, with the related snowfall then exiting our region by midnight. Despite the storm’s fairly rapid movement, it will pack a pretty good wallop today, especially in southern Vermont, where a foot of snow is possible. Accumulation will generally decrease the farther north you look, whittling down to the 2 to 4 inch range up around the international border. The timing of this storm will be particularly difficult for commuters, as it is likely to affect both morning and evening commutes, with steady snow in between. The good news is that there isn’t any kind of thaw in the foreseeable future, so whatever snow that falls will stick around for a while, something that snow lovers have seen too little of this winter.

Comments Off on Winter storm moves into region; many closures and cancellations

Posted on February 4, 2014 by Rob Mitchell | Comments Off on Cancellations around Vermont

Due to an expected snowstorm, the Vermont Humanities Council‘s First Wednesdays lecture with Dartmouth professor Randall Balmer, scheduled for Wednesday, February 5, at Ilsley Public Library at 7:00 pm has been rescheduled for Wednesday, June 4 at the same time. The talk, “Redeemer President: The Significance of Jimmy Carter,” is part of the Vermont Humanities Council’s First Wednesdays series.

Comments Off on Cancellations around Vermont

Posted on August 29, 2013 by Rob Mitchell | Comments Off on Floods swamp streets in White River Junction 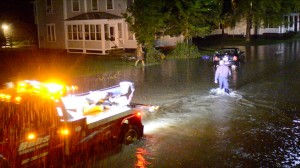 WHITE RIVER JUNCTION – Exactly two years after Tropical Storm Irene inundated sections of White River Junction there was an eerie flashback Wednesday night as a torrential thunderstorm and an accompanying water main break sent several streets under water.
Drivers found themselves up to the bottoms of their car’s doors in water in several spots ranging from Gates Street behind the large telephone company building to the railroad underpass on Maple Street right next to the Hartford Town Hall where two cars that had been headed in opposite directions found themselves stalled about 9:30 p.m.
Supervising the efforts of two tow trucks that had been called in to haul the stranded drivers to safety, Hartford Police Sgt. Connie Kelley said she was nearly caught up by the freak storm herself.
“I came down the hill on Route 5 by the former LISTEN Center/25,000 Gifts building and hit basically like a lake in the road and the water came up over my hood,” Sgt. Kelley recalled. 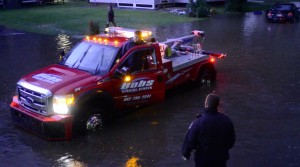 Crews later determined that a water main had given way near the intersection of Routes 4 and 5 sending a wave of water that actually pushed a television set that had been sitting in front of the former LISTEN building clear down the hill to the intersection in front of the Bugbee Senior Center.
“This is unprecedented,” noted Hotel Coolidge owner David Briggs shortly after 10 p.m. as he waved a flashlight across the completely flooded parking lot behind the Gates Briggs Building. The building houses the Briggs Opera House and several downtown businesses including Revolution and the popular Tuckerbox coffee shop.
For a time much of Currier Street, which runs behind the Hotel Coolidge, was flooded right up to the curbs, as were stretches of nearby Gates Street and Church Street in front of St. Anthony’s Catholic Church.
Briggs said the parking lots in the downtown have never flooded like this in previous years but he said this is the second time they’ve done so this summer.  “Something has changed,” he said, pointing out that the water in the basements of the downtown block appeared to be coming in from, rather than going out through, the storm drain system.

Comments Off on Floods swamp streets in White River Junction

Posted on July 9, 2013 by Rob Mitchell | Comments Off on Williamstown flooding forces evacuations

WILLIAMSTOWN — Heavy rain has caused some flash flooding in Williamstown, where 15 to 20 families had evacuated from their homes overnight.

The rain moved over parts of Orange County and surrounding areas early Tuesday. Town Manager Jackie Higgins says several residents experienced major flooding in their basements and near their homes. The water has since receded. Local roads and Routes 64 and 14 have been reopened. But Higgins urged residents to use caution when driving, because there have been some washouts.

Posted on July 5, 2013 by Rob Mitchell | Comments Off on Amtrak hopes to restore Vermonter train service by weekend
WHITE RIVER JUNCTION – Amtrak is looking to restore train service to its Vermonter line sometime this weekend,  after flash floods damaged tracks in Roxbury and Braintree on Thursday.
“They are hoping to have it back running as early as Saturday morning,” Amtrak Conductor Mike Kujala explained Friday to some of the 75 passengers who were moved onto a pair of chartered buses.
The buses have been relaying the Vermonter’s ridership back and forth between St. Albans and Springfield, Mass., the point where Amtrak’s trains are currently halting their northbound runs but from which they are able to continue down to New York City and beyond.
Wednesday night’s northbound Vermonter squeaked through its narrow valley before the Third Branch of the White River rose over the tracks but that train is still holed up in St. Albans, unable to move until the New England Central Railroad put the damaged tracks back in service.
- Eric Francis | Correspondent

Posted on July 5, 2013 by Rob Mitchell | Comments Off on Two drown in separate incidents

GROTON, Vt. (AP) — Vermont State Police say the body of a Massachusetts man has been found in Lake Groton. Police say they were called about a possible drowning just after midnight on Friday morning.

Police say the victim — 24-year-old Kirk Biancardi of Grafton, Mass. — was found in about 2 feet of water before troopers arrived.

Authorities say there is nothing suspicious about the incident and there were no signs of foul play.

An autopsy is being performed to determine the cause of death.

Crews have also recovered the body of a missing Vermont swimmer who was swept over Bartlett Falls in Bristol. Police say two men had gone swimming in the New Haven River on Thursday but lost sight of one another. Search efforts were suspended Thursday night due to dangerous conditions, and the body was recovered Friday morning.

More heavy rain in Vermont has caused rivers and streams to spill over their banks and flood roads.

The state Department of Public Safety is warning swimmers of the hazardous conditions. The high waters have created conditions that are not safe for swimming.

The National Weather Service says scattered showers and thunderstorms are in Friday’s forecast for much of the state.

Comments Off on Two drown in separate incidents

Posted on June 3, 2013 by Rob Mitchell | Comments Off on Crews continue cleanup from severe Sunday storm

ST. JOHNSBURY, Vt. (AP) — Crews are restoring power and cleaning up tree debris from a strong storm that moved through northern Vermont.
Authorities say the worst of the damage was in Danville and St. Johnsbury. Some roads were blocked because of fallen trees and power lines from Sunday’s storm.
State Troopers from St. Johnsbury responded to numerous reports of downed trees and power lines in Caledonia and Essex counties.
The Essex County Sheriff’s Department also assisted with a motor vehicle on Victory Road where a tree fell on it and the two occupants were reported trapped. Both occupants had minor injuries and were taken to Weeks Memorial Hospital in Lancaster, N.H.
Green Mountain Power reported about 3,600 customers without power Monday morning, down from a peak of about 13,500 on Sunday night.

Comments Off on Crews continue cleanup from severe Sunday storm