Posted on May 15, 2014 by Patty Minichiello | Comments Off on The Lloyds: Love, theater ‘Love Letters’ 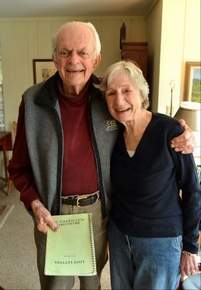 Albert J. Marro / Staff Photo
Sam Lloyd and his wife Barbara Lloyd, right, began acting at the Weston Playhouse in 1954 — long before they were married. Sixty years later they are still acting together. They will appear in a one-time only production of “Love Letters” Saturday in Ludlow.

Walking to the theater across the road in the daylight takes about five minutes. A trip back uphill to the house after the sun has set takes about seven. That’s how close Barbara and Sam Lloyd live to the place they met, fell in love and built a life around. “We made a choice,” says Barbara Lloyd, a slim woman with short, stylish hair and a captivating smile. “We live a life and we have the Playhouse.”  END_OF_DOCUMENT_TOKEN_TO_BE_REPLACED

Comments Off on The Lloyds: Love, theater ‘Love Letters’

Posted on March 12, 2014 by Rob Mitchell | Comments Off on Mark LeGrand brings the honky tonk life to Sweet Melissa’s By Art Edelstein | Arts Correspondent
It’s become something of a Friday early evening tradition that the place to be at week’s end is Sweet Melissa’s on Langdon Street in Montpelier. Part of the reason so many people stop in for a drink or some food is the live music. Holding down the happy hour slot is singer Mark LeGrand and his honky tonk band.
LeGrand is a mainstay here, as he has been at a variety of venues around town for a decade or more with his country infused vocals, mellow acoustic guitar and a variety of musicians who have been members of his backing band.
LeGrand recently released his third solo album, albeit a seven song EP CD, “Burn It Down,” and it continues the growth of this durable local performer’s songwriting career.

What we get on “Burn It Down” is LeGrand’s view of the world, one that was born and nurtured in New England, primarily in Vermont. Although a native of Connecticut, he has lived here since 1967. His early music career found him playing roadhouse dives along Route 22 in New York State. “Into The Night,” track one on the CD, describes that early musical lifestyle. END_OF_DOCUMENT_TOKEN_TO_BE_REPLACED

Artist Stephen Schaub to feature at Christine Price at Castleton

Posted on January 20, 2014 by Rob Mitchell | Comments Off on Artist Stephen Schaub to feature at Christine Price at Castleton

CASTLETON – Mixed media artist Stephen Schaub will be featured in an exhibit in the Christine Price Gallery at Castleton College Jan. 21-Feb. 21. An artist talk is scheduled for 12:30 p.m. Tuesday, Jan. 28, in Herrick Auditorium, and reception at 5 p.m. Thursday, Jan. 30, in the gallery.
Combining the aspects of painting, the techniques of photography and the presentation of works on paper, Schaub’s artworks defy conventional classification. His works reference the delicate, subjective nature of life and depict in-between moments and anonymous figures in scenes of hyper-reality.
After serving as a U.S. Marine in the first Gulf War and receiving the Navy Achievement Medal, Schaub went on to graduate from the Rochester Institute of Technology in Photographic Arts and Sciences. Having authored two collections of his artworks, he has been featured in numerous publications and shows both at home and abroad, including the showing of “Through a Glass Darkly” in Paris in 2004.
The Christine Price Gallery is located on the Castleton College campus in the Fine Arts Center and is open 9 a.m. to 5 p.m. Monday-Friday. For more information, contact William Ramage at 802-468-1266 or [email protected]

Posted on January 15, 2014 by Rob Mitchell | Comments Off on Rabbi-Comedian returns to Weston

WESTON — Rabbi and standup comedian Bob Alper, a daily presence on Sirius/XM satellite radio who performs nearly 80 shows around the country each year and has appeared on many network television programs, returns to the Old Parish Church at 7:30 p.m. Saturday, Jan. 18. Alper last performed in Weston three years ago.
Describing himself as “the world’s only practicing clergyman doing standup comedy … intentionally,” Alper’s new show will include observations about “The Spirituality of Laughter,” excerpts from his new book, “Thanks. I Needed That,” and, of course, a hearty dose of his trademark standup comedy. Adults and children 11 and older are welcome.
While there is no charge to attend the event, people are encouraged to donate $10 will help support food assistance programs by three area charities. For more information, call Chris Perry at 802-824-4248.

Comments Off on Rabbi-Comedian returns to Weston

Posted on October 13, 2013 by Rob Mitchell | Comments Off on ‘Crucible’ as opera comes to Lost Nation Theater

MONTPELIER — At 7 p.m. Wednesday, Oct. 17 in the Lost Nation Theater Lobby, longtime LNT company member Tim Tavcar will present a special program in conjunction with the theater’s production of Arthur Miller’s “The Crucible,” “‘The Crucible’ as Opera — a Journey with Composer Robert Ward.”
The Cleveland-born composer Robert Ward recently passed away at the age of 95. In his significant legacy of musical compositions, he gave the public what has become arguably one of the most successful American operas ever written based on Miller’s powerful drama of the same name. Ward was awarded the Pulitzer Prize in Music for his work. (Many think it was Miller who won the Pulitzer for Crucible, but Miller won the Tony for Best Play in 1953, while Ward won the Pulitzer in 1962.)
Assuming the persona of Robert Ward, Tavcar will perform excerpts from letters, diaries and lecture notes that deal with the composition of his opera along with personal glimpses of Miller, Marilyn Monroe, Leonard Bernstein, librettist Bernard Stambler, the artists of the New York City Opera and more. (Ward “beat out” Bernstein for permission to create the opera.) Throughout the presentation, excerpts of this dramatic and melodious work from the 1962 original cast recording will illustrate Ward’s reminiscences.
Admission is by donation ($15 suggested); for information, call 802-229-0492, or go online to www.lostnationtheater.org.

Comments Off on ‘Crucible’ as opera comes to Lost Nation Theater

WATERBURY — MOXIE Productions presents “Steel Magnolias,” by Robert Harling, at 7:30 p.m. Friday and Saturday, Oct. 11 and 12, at the White Meeting House at the Congregational Church.
This first of the series, “Steel Magnolias,” will be directed by local playwright and theater professor Jeanne Beckwith and feature local actors Monica Callan, Claire Demarais, Sandra Gartner, Ramona Godfrey, Mary Scripps, and Katie Whitney. A picture of small town eccentricity, “Steel Magnolias” is a lively comedy full of hilarious repartee and poignant strength, as colorful neighbors come together when tragedy hits.
The “America’s Favorites Series” will showcase plays which American luminaries have awarded, theater companies have most produced, and audiences in the past have talked the most about, in theatrical readings from October 2013 to May 2014, with local professional and community actors and directors.
Admission is a pay-what-you-can donation. For information, call 802-244-4168, or email [email protected]

Posted on October 2, 2013 by Rob Mitchell | Comments Off on Hiroya Tsukamoto to play Brandon Music on Saturday

BRANDON – Hiroya Tsukamoto’s music has been described as “new acoustic music which is a blend of North and South American folk plus Japanese roots.” Tsukamoto will perform at 7:30 p.m. Saturday, Oct. 5 at Brandon Music.
Tsukamoto is a composer, guitarist and singer-songwriter from Kyoto, Japan. While a student at Osaka University, he was introduced to a musical and social movement in South America called Nueva Cancion headed by musical legends such as Victor Jara and Violeta Para.
General admission is $15 (a pre-concert dinner is available for $15); call 802-465-4071, or e-mail [email protected]

Comments Off on Hiroya Tsukamoto to play Brandon Music on Saturday

Posted on September 30, 2013 by Rob Mitchell | Comments Off on ‘Othello’ broadcast in Middlebury Thursday

MIDDLEBURY – Nicholas Hytner’s acclaimed National Theatre production of Shakespeare’s “Othello,” with Adrian Lester in the title role and Rory Kinnear as Iago, will be broadcast to Town Hall Theater at 7 p.m. Thursday, Oct. 3.
“A breathtaking show of emotional firepower. Adrian Lester and Rory Kinnear are superb,” reported The Times.
Othello, newly married to Desdemona who is half his age, is appointed leader of a military operation to defend Cyprus from the Turks. Iago, his ensign, passed over for promotion in favor of young Cassio, persuades Othello that Cassio and Desdemona are having an affair.
Tickets are $17, $10 for students; call 802 382-9222, or go online to www.townhalltheater.org.

Comments Off on ‘Othello’ broadcast in Middlebury Thursday

Posted on September 30, 2013 by Rob Mitchell | Comments Off on Jay Nash comes home to Woodstock Thursday

WOODSTOCK – Indie-folk artist Jay Nash returns from a three-week European tour for a homecoming show at Town Hall Theatre on Thursday, Oct. 3.
This is Nash’s first show in the Upper Valley region since May of 2012. In the interim, Nash has toured the U.S. and Canada extensively and released the critically acclaimed album, “Letters from the Lost,” which “offers up plenty of lush indie-folk and acoustic Americana, (while) tossing everything from rootsy soul to indie rock into the mix” (American Songwriter). “A comprehensive glimpse into the niche Nash has managed to craft for himself over the years,” (Paste) “Letters from the Lost” was largely recorded in Nash’s Vermont home studio. In addition, he has produced albums for Sweet Talking Liars and Eliza Moore and composed numerous pieces for television, including 9 major network commercials in the last year.
Tickets are $18, $15 in advance; call 802-457-3981, or go online to www.pentanglearts.org.

Comments Off on Jay Nash comes home to Woodstock Thursday