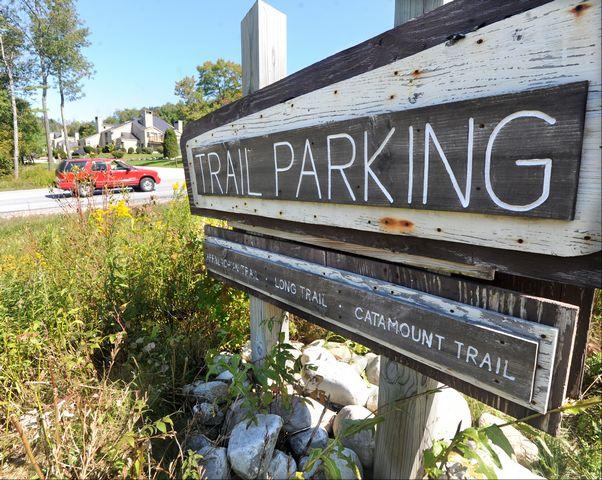 The Long, Appalachian and Catamount trails overlap in Killington near the Fox Hollow condominiums.

Businesses invest in the Long Trail

Named after the Long Trail, the brewery has put its financial support behind the Green Mountain Club’s efforts to maintain the 500 miles of trails in the state, including 272 miles that make up the Long Trail.

The Bridgewater brewery is one of 85 businesses that support the Green Mountain Club, which has an annual budget of $2 million.

“We wanted to branch out because I think there’s a lot of opportunity for businesses, up and down the state where the Long Trail runs, to support the club and then us to work to support them,” Wiquist said.

Long Trail Brewery’s support of the Green Mountain Club (www.greenmountainclub.org) ranges from donating a portion of sales from its Centennial Red ale, that in 2010 commemorated the centennial of the founding of the Green Mountain Club, to beer-pairing dinners in conjunction with the Three Tomatoes Trattoria restaurants. The dinners raised several thousand dollars for the club.

Inside the brewery, visitors can make donations to the club and learn about the Long Trail.

“We share a lot of the same values,’’ Chaffin said. “Our Long Trail slogan is ‘Take a Hike,’ and obviously we want to support the club that’s maintaining (the) Long Trail.”

Last week, the brewery (www.longtrail.com) hosted a business social in support of the Green Mountain Club.

Megan Smith, commissioner of the Department of Tourism and Marketing, said partnerships like the one cultivated between the Green Mountain Club and Long Trail not only help promote tourism but also raise the public profile of the business.

Smith said Long Trail Brewing already sponsors many tourism-related events and organizations, which in turn helps build the brand “through people coming to Vermont and then going home and buying their beer.”

She also said the partnerships are becoming increasingly important for nonprofit groups, as grants are harder to come by.

In addition to maintaining the trail, the Green Mountain Club holds educational workshops for adults and children.

Of the club’s nearly $2 million annual budget, two-thirds comes from individual members and businesses with the U.S. Forest Service and the state making up the rest.

“Our volunteers do a great amount of work but we do have overhead costs and the costs of the major projects we have to do,” Wiquist said.

He said future projects include rebuilding the Thundering Falls boardwalk in Killington that was washed away last year during Tropical Storm Irene.

At Onion River Sports in Montpelier, supporting the club is a way to ensure the survival of the Long Trail and it’s also good for business, said Tristan Von Duntz, who calls himself the store’s “outdoor ambassador.”

“They’ve come a long way in the past 10 years, preserving corridors and protecting that whole 272-mile trail from Massachusetts to Canada,” Von Duntz said. “So by giving them that extra incentive, 10 percent off anything hiking-related, I think it helps people support the GMC and also protect the Long Trail.”

The partnership with the business community is a two-way street. Wiquist said businesses also benefit, with the GMC offering corporate partners an opportunity tap into the club’s membership. He said many business supporters offer discounts to club members.

“We do our best to advertise them through our quarterly magazine or Facebook page and our emails to our members,” he said. “We have 10,000 members, one of the biggest membership organizations in the state.”

Tweet
Pin It
This entry was posted in Business, Recreation. Bookmark the permalink.