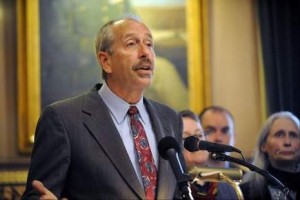 MONTPELIER — A Democratic candidate for lieutenant governor is looking to make the economy the top priority as he seeks to tap public campaign dollars.While he’s been meeting with Vermont’s residents and potential voters throughout May, John Bauer formally announced his candidacy during a press conference Monday morning at the State House.“I’ve been travelling the state, talking to voters, and every hard-working Vermonter I’ve met is concerned about the economy,” Bauer said. “They’re wondering, ‘Why doesn’t this economy work for me? We have low unemployment, I’m working hard and I’m more productive than I’ve ever been, and yet, still, I’m struggling to maintain my place in the world.’”Bauer said his campaign will focus on what he called “new economic approaches.” He supports the idea of a state bank put forward by Sen. Anthony Pollina, P-Washington County. He also said he does not believe Vermont’s tax system is progressive enough and he advocated raising taxes on the rich.“It’s time for us to look at ways to spread wealth in America, and I believe we could start right here in the state of Vermont,” Bauer said.Bauer – the sound supervisor at the Spruce Peak Performing Arts Center - made the announcement after receiving the endorsement of the Vermont Democratic Party during a meeting Saturday.“It’s gratifying to get the support of the party that I have supported for so long,” Bauer said.Ben Sarle, director of communications and outreach for the Vermont Democratic Party, said Bauer received in excess of the 67 percent of votes needed from party delegates to receive an endorsement.“He’s a friend of the party and long-time democrat from Lamoille County and we welcome him to join the conversation,” Sarle said.The party has the right to endorse more than one candidate. Sarle said the party does not currently have any other candidates in mind for the post of lieutenant governor.The 57-year old Bauer managed Jeb Spaulding’s campaign for state treasurer in 2002. He was also involved in Howard Dean’s presidential run in 2004 and managed Susan Bartlett’s bid for governor of Vermont in 2010.In his own right, Bauer previously sat on the school board in Hyde Park and currently holds the post of auditor for his home town of Jeffersonville.Bauer will face a challenge in unseating two-time Lt. Gov. Phil Scott, perhaps one of the most popular republican office holders in the state. To help close that divide, Bauer is looking to tap into public campaign dollars.Bauer has until June 12 to raise $17,500 from a minimum of 750 donors who give $50 or less. To compel him to hit the campaign trail, the rules stipulate that no more than 25 percent of the donors can hail from Bauer’s county of residency.If he meets this goal, Bauer will receive $50,000 – minus the amount he has raised – for the primary. In addition, he would receive $150,000 for the general election, assuming he wins the primary.“It is clear that the influence of money in politics is like a snake wrapped around democracy,” Bauer said. “Every day, it grows stronger and squeezes harder. Public financing is a way to fight back right now against the millionaires, billionaires and multinational corporations who would strangle democracy to feed their quarterly profits.”While Bauer said he would not accept corporate contributions, he also said he would take money from the Vermont Democratic Party, whose donor list includes multiple corporate supporters.Whether Gov. Peter Shumlin will support Bauer remains unknown, with his office failing to respond to multiple inquiries Monday.For more information about Bauer, visit his website at www.bauervt.com.