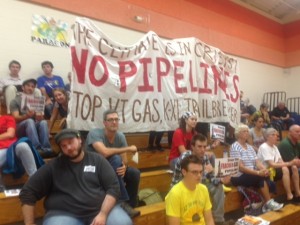 Bruce Edwards / Staff Photo
Opponents of a natural gas pipeline made their views known at a public hearing Tuesday night in Middlebury.

By BRUCE EDWARDS | STAFF WRITER
MIDDLEBURY - Opponents of a proposed natural gas pipeline packed the gym at Middlebury Union Middle School Tuesday night to tell the Public Service Board they want no part of a pipeline that will bring fracked natural gas to Addison County.
One after one opponents came to the podium to denounce in often sharp terms plans by Vermont Gas Systems to extend its pipeline 43 miles from Chittenden County south to Middlebury with the prospect the pipeline could be extended west under Lake Champlain to New York and further south to Rutland.
A common theme that came across from the public comments was that the world was near the tipping point when it came to climate change and global warming. Despite supporters’ claims that natural gas is cleaner burning than fuel oil or coal, opponents were unrelenting in their criticism that emissions from fracked natural gas in particular will only add to the climate change problem.
Fracking is the process that uses water and chemicals under extremely high pressure to disgorge otherwise hard to extract natural gas beneath the earth’s surface.
But those opposed to the pipeline that would bring gas down from Canada said that the fracking process can destroy the land and pollute drinking water.
“We’re running out of time to stop climate change,” said Rebecca Foster of Charlotte, who like others urged the three-member board to deny Vermont Gas Systems a CPG, or certificate of public good.
Foster said just because the technology exists to extract natural gas from rock “doesn’t mean we should.”
Sharon Tierra of Shoreham, and a member of the Vermont Center for Public Good, told the board that if Vermont’s stated long term energy goal is to rely on renewables for 90 percent of its energy needs, then extending the natural gas pipeline “only increases Vermont’s reliance on dangerous fossil fuels.”
Tierra and others who voiced their disapproval were often cheered on with applause from the crowd who filled the gym’s bleachers and floor. Many waved anti-pipeline signs that also doubled as a fan on a humid evening.
Cornwall property owner Mary Martin said the path of the proposed pipeline and its impact makes her nervous. Martin alleged that VGS representatives “violated their property rights” by trespassing on their land.
Another opponent said if companies want to use natural gas they already have the ability to do so and that a pipeline isn’t necessary. The option she said is for businesses to truck in natural gas.
Shortly after the hearing started, opponents drew a rebuke from Commissioner John Burke, who noticed two or three speakers who had signed up to speak as supporters of the project “were not telling the truth,” and came to the podium to oppose the project. “We should actually be ashamed,” Burke said.
The hearing wasn’t without its lighter moments. It’s not quite Halloween but several speakers came to the podium in costume to make their opposition clear. One man wearing a dinosaur head, who brought along his own sound effects, simply held up a sign to the crowd warning of the coming “time bomb” of global warming.
The hearing was attended by a few supporters of the pipeline. One Addison County resident, who stepped to the podium, said she supports the project because it makes economic and environmental sense.
“I believe if we’re going to compete for business in this area, throughout the state, and in Middlebury, we have to be competitive with other businesses,” she said.
The woman also said based on her research that the 500,000 miles of pipeline in the country is the safest means of transportation.
Others speaking in support were former Rutland mayor Jeffrey Wennberg (now the head of Rutland’s department of public works), who is also a former commissioner of the Department of Environmental Conservation. Following him was David O’Brien, former commissioner of the Department of Public Service, the state agency that serves as the consumer advocate in utility cases.
Joe Fusco of Casella Waste Systems was the first of more than 80 individuals who addressed the board.
Fusco said Casella has gradually been changing its diesel fleet of trucks over to compressed natural gas at a significant cost savings.
Fusco said the eight trucks converted so far run cleaner and are less expensive to operate.
“We would like to see those economic and environmental impacts brought down to this part of the state, at least to Middlebury and certainly in the future further south,” Fusco said.
Tuesday’s hearing was the second of two hearings on the pipeline. The board will hold a technical hearing on Monday.

Tweet
Pin It
This entry was posted in Addison County, Business, Environment, Politics and tagged natural gas, Public Service Board. Bookmark the permalink.