KILLINGTON — The Select Board on Tuesday rejected a request from town listers to change the value of three properties on the grand list.
The value of the three properties will be listed lower than they should be until the new year, according to Walter “Butch” Findiesen, one of the town’s listers.
The request to update the property values came after the listers found three undervalued properties, a common occurrence when reviewing more than 3,000 properties that make up the town’s housing and land stock, Findiesen said.
The listers are still reviewing what the Select Board’s decision means and the reasoning behind it.
Findiesen said he didn’t know if there would be any impact on property taxes.

PLYMOUTH — The environmental permitting process for a controversial gravel pit project is in recess, with the most recent scheduled hearing cancelled.

Noise experts from both sides of the issue — Hawk Mountain Resort and Ralph Michael, owner of the Frog City Gravel Pit and Plymouth Select Board chairman — are consulting with each other over the latest evidence on how much noise will come from the project, according to Linda Matteson, coordinator for the District 3 Environmental Commission.

Both sides are in a dispute over the pit, with many Hawk residents in opposition to the commercial activity because of projected noise and traffic.

The pit was open during the Tropical Storm Irene recovery to produce gravel for new roads, but then shut down after the temporary permit expired.

Michael is moving forward with the Act 250 permitting process but needs a local permit to operate as well.

He withdrew his local permit application to re-open the pit after controversy among residents.

There have been five public hearings on the Act 250 permitting process.

The next hearing, set for Thursday, was canceled.

For the latest updates on the plans for the gravel pit and relevant documentation, go to www.anr.state.vt.us and type in Act 250 application #3W1049 — Frog City, LLC.

Hight hilltops are turning color as the foliage season is just starting to erupt.

According to the VT Department of Tourism: “Rutland County Forester Chris Stone notes Route 103 is revealing 5-20 percent early stages. Stone says trees are just starting to lose some green and hints of yellow and orange are starting to show at higher elevations. Some scattered individual red maples are turning at higher elevation wetlands. While the color has yet to really show, there is a hint of fall on the hillsides.

Your best bet to see foliage as it begins are in the higher elevation areas in the northernmost regions  that will offer the most panoramic views of emerging color across the valleys. Many low-lying marsh areas will offer some of the most vivid and varied early season change. Route 108 through Smugglers’ Notch between Stowe and Cambridge is showing color, as are Routes 242 and 100 near Jay Peak; plus Routes 16 and 5A in the Lake Willoughby area. The Worcester Range and Mount Elmore along Route 12 north of Montpelier are tinged with early color, as are views from Route 14 in the Hardwick and Craftsbury region.

Sam Schenski, the Windham and Windsor County Forester also suggests Rt. 106 through Perkinsville; Tyson Rd. from Reading to Plymouth and East Hill Rd. in Andover – all of which, he notes are in early stages of foliage. 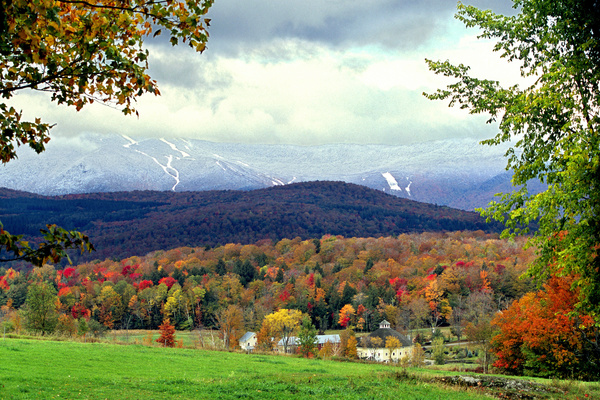 Posted on September 6, 2012 by Vermont Today Editor | Leave a comment

A mentally incompetent man faced with a charge of attempted murder in Killington has been granted permission to move from the Springfield jail to a psychiatric care center in West Burke.
Rutland Judge Cortland Corsones issued a decision Friday that granted a state Department of Health request to move 55-year-old Mark A. Sailor from the jail to the Eagle Eye Farm Rehabilitation Center where he will live in a home while under 24-hour surveillance.
The Health Department’s request was contested by Rutland County State’s Attorney Marc Brierre, who said he would bring Sailor to trial if the New Jersey man is ever deemed competent to stand trial, and by the woman Sailor allegedly stabbed, Barbara Ashworth.
But in a six-page decision issued by Corsones a week after the hearing, the judge said the law required a balance between public safety and the criminal system and Sailor’s mental health treatment needs.
“The victim’s concerns are entirely reasonable, however, the court must follow the law and the law requires the court to ‘determine whether there exists an available program of treatment for the person which is an appropriate alternative to hospitalization,’” Corsones wrote.

Suzie Dundas, the head of Killington’s Economic Development and Tourism Department, has resigned for another position in national media and marketing. Dundas took over the position this year from Town Manager Seth Webb, who said he will manage the department while the town searches for Dundas’ replacement. Dundas’ resignation is effective Aug. 31. Webb was Dundas’  mentor before he was promoted to town manager last year. Dundas wrote in an email this morning: “Having seen all the progress that’s been accomplished by the town and the passion of so many residents in my time here, I feel confident that Killington will continue to grow and see positive changes in the coming years. My resignation is a reflection of my desire to make a career shift – not of a lack of faith in this town. I will continue to follow Killington closely, and will very fondly remember my years spent working with everyone here in this beautiful setting as the town evolves and grows.”

Suzie Dundas,seen here competing in a recent Spartan obstacle race, has resigned from her post as head of the Killington Economic Development and Tourism Office effective Aug. 31.

KILLINGTON — A Select Board member has suggested offering free college tuition to families who move to the ski resort town.
Longtime businessman Bernie Rome made his proposal during a recent brainstorming session about how the board can secure the town’s financial future.
Rome told Vermont Public Radio more students in town would help secure more school funding and contribute to the tax base.
He said with Green Mountain College operating a campus in town, and with increasing student debt, the ingredients for Killington offering free tuition are in place.
He pointed to the 3,000 second-home owners in Killington, saying they might elect to move in permanently if their children can get a free college education.
Board members encouraged Rome to develop his idea and explore how the town would pay for it.

KILLINGTON — A select board member in Killington suggests giving free college tuition to families who move to the ski resort town.
Longtime businessman Bernie Rome made his proposal during a recent brainstorming session about how the board can secure the town’s financial future.
Rome tells Vermont Public Radio more students in town would help secure more school funding and contribute to the tax base.
He says with Green Mountain College in town and increasing student debt, the ingredients for Killington offering free tuition are in place.
He points to the 3,000 second homeowners in Killington, saying they might elect to move so their children could get a college education there.
Select board members are encouraging Rome to develop his idea and explore how the town would pay for it.

Police are investigating the burglary of an East Lane Road residence in Killington Saturday at about 2 p.m.

Police responded to the home to find a Remington 870 shotgun, a Skil Chainsaw, a pair of K2 skis, and ski boots stolen.

Anyone with information regarding the burglary are asked to call State Police at 773-9101.

Three separate incidents of lost hikers in Vermont overt the last few days have kept police and search personnel busy.

On Tuesday, Shung Yee, 38, and Laurentius Heestermans, 49, of St. Martin, were hiking around Lefferts Pond Trail in Chittenden when they took a turn onto a VAST trail and became disoriented. Yee called 9-1-1 around 9 p.m. and using the VAST trail markings she described, police were able to figure out that the pair were at the intersection of VAST 7N and 4W. State Police drove in and picked them up, giving the couple a ride back to their parked car.

Earlier that same day State Police received a call from Michael McEnteggart, 70, of Florida, who had become lost while hiking along the Long Trail via the Little Pond trailhead in Woodford.  He became disoriented on his way out.  He was not properly clothed or equipped to spend a long duration of time in the woods.

State Police, Bennington Rural Fire and Bennington Rescue, along with Woodford resident Ryan Thurber came to help, but before any of the search teams were far into the woods, McEnteggart found his way out near a hous on Old Harbour road, dehydrated but otherwise fine.

Finally, also on Tuesday, Adam Santiago of Wappingers Falls, N.Y., was found hours after he’d separated from a friend who decided not to continue hiking to Baker Peak in the Green Mountain National Forest.
At around 4:40 p.m., the friend notified authorities that 28-year-old Santiago had not returned, and four hours later area residents told state police they could hear a man calling for help.
Santiago told police he hiked to the peak but became disoriented and unable to find the descending trail. When he went down the mountain, he became stuck in mud. He was not injured.

Killington Resort and a man who sued the ski area after he broke his leg there in 2009  have settled the case out of court.

Alfred Rocks of Egg Harbor, N.J., sued the resort in 2010 alleging the resort failed to maintain the trail “Ovation” in a “reasonably safe condition,” resulting in his fall and then, further injured him when a first aid toboggan carrying him down the mountain flipped over, causing more injuries.

A clerk at the Burlington court said the parties settled the case out of court. The court was notified of the parties’ decision to do so mid-morning Monday.

The trial began Friday in federal court in Burlington and ended Monday in Rutland.