Snow showers ahead - all week long 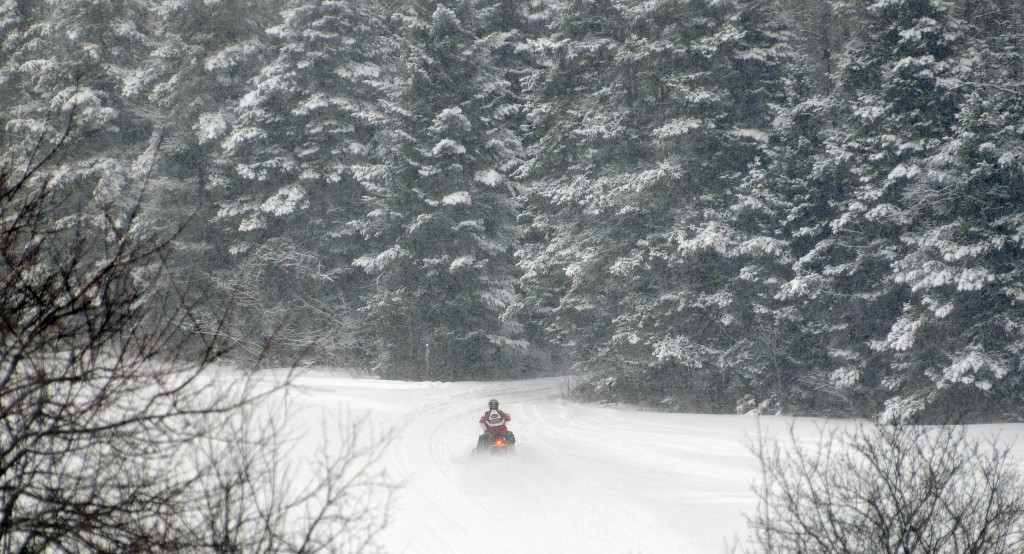 Stefan Hard / Staff Photo
A lone snowmobiler heads into a dense conifer forest on a VAST trail Sunday in Washington.

The snow difference is stark depending on where you are in Vermont. The Rutland area has almost no snow in the valleys; up on the mountain it looks like a normal winter; to the northeast there’s snow and on the eastern slopes of the Greens there’s tons of it, especially up in the far north. That makes for a confusing time, in some ways, where the weather forecast may or may not apply, depending on which valley you’re in or hill you’re on. So, when the forecast now says “snow”,  what to make of it? I guess we’ve got to take them at their word…

Weak surface HIGH pressure is building overhead in the wake of the complex LOW pressure and a surface trough that brought 2-7” of snow to eastern Vermont and a coating to 3” to the western half of the state. But with light winds through the lower atmosphere, it will be difficult to mix residual moisture out, and partial to considerable cloudiness should prevail both today and tonight.  Quiet weather will continue tomorrow, but beyond that, a strong and complex storm system will affect us for an extended period.  Precipitation ahead of the system will arrive before daybreak Wednesday.  Multiple bursts of snow or mixed snow and rain will follow from Wednesday through Friday, with snow showers possibly lingering through the weekend. Total snow accumulation could be substantial, especially in those higher terrain areas that benefit from strong and prolonged east to southeast flow, such as the southern Green Mountains, and the Orange Heights. There will likely be well-defined snow shadows along the floors of the Connecticut and lower Passumpsic Valleys, and possibly along the western slopes of the Green Mountains. Temperatures during that period will run above normal thanks to the combination of clouds and an onshore flow.

Tweet
Pin It
This entry was posted in Vermont News, Weather. Bookmark the permalink.