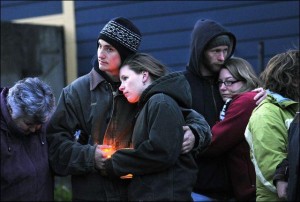 ST JOHNSBURY — State Police found a body on Monday afternoon that is believed to be that of Melissa Jenkins, a 33-year-old St. Johnsbury woman who disappeared suspiciously Sunday night.

The body was found at approximately 1:30 p.m. near a remote pull off of Comerford Dam Road in Barnet, where State Police detectives said there appears to have been recent activity. Major Ed Ledo, criminal division commander, would not say that the body was a positive match for Jenkins.

“The body is believed to be that of Ms. Jenkins, however a positive identification of the body will not be made until the autopsy is performed,” said Ledo at a press conference at St. Johnsbury Academy, where Jenkins taught, on Monday night.

The body was transported to the Office of the Chief Medical Examiner in Burlington for an autopsy, which is scheduled for today. Detectives are hopeful that the autopsy will provide positive identification of the victim and give the cause of death.

Ledo would not disclose the details of how the body was found or reveal any evidence that has been collected in the case.

On Sunday night at approximately 11:30 p.m., State Police were notified by a friend of Jenkins that she had gone missing. The friend had not heard from Jenkins since 8:30 p.m. When the friend went out looking for Jenkins, the friend found her 2006 silver Suzuki Grand Vitara parked alongside Goss Hollow Road in St. Johnsbury. The friend told police that Jenkins was not in the car, which was still running, but Jenkins’ 2-year-old son was in the car and unharmed.

Troopers found evidence at the scene indicating that Jenkins’ disappearance is a result of foul play. They concluded that the evidence showed signs that a struggle had occurred. Ledo would not elaborate as to the kind of evidence that was found at the scene.

“We know she didn’t leave voluntarily based upon what we have at the scene,” Ledo said at a news conference at the St. Johnsbury State Police Barracks on Monday morning.

Ledo said that State Police have received several leads regarding Jenkins’ disappearance. They are following up on them and have conducted a substantial amount of interviews, Ledo said. There are no particular suspects identified in the case, Ledo said.

Jenkins, who is a science teacher at St. Johnsbury Academy, is described as a white female approximately 5 feet 4 inches tall and approximately 130 pounds with blonde hair and hazel eyes. Jenkins lives on Goss Hollow Road, near where her car was found.

Jenkins graduated from Lyndon State College with a bachelor’s degree in natural science and geology, and began teaching at the St. Johnsbury Academy in 2004, according to Headmaster Tom Lovett, who heard about her disappearance early Monday morning.

Students at the school were informed at a morning assembly and have rallied together as a community to support one another, Lovett said. Lovett said some students had seen Jenkins over the weekend around town.

“The best thing we can do right now is to remain hopeful,” Lovett said.

Lovett said Jenkins was an outgoing and energetic teacher who was very caring about her students. Jenkins often taught students who didn’t love science but cultivated their appreciation for the subject through her instruction.

Eric Berry, the husband of Jenkins’ first cousin, said that Jenkins’ entire extended family has been saddened by the news of her disappearance.

“Everyone loved her,” Berry said. “She would make the whole room light up.”

Ledo said that Jenkins does not a have a history of disappearance.

“She is very well known within this community,” Ledo said. “We are pulling out every resource that we can in order to find her and bring her back safely.”

Berry said he believes Jenkins left her house on Sunday night with the idea that she would try to help somebody.

Ledo said Jenkins is a single parent, and her son was interviewed by State Police regarding the incident. Ledo would not reveal what, if anything, the boy said during the interview.

Due to the investigation, several sections of Goss Hollow Road were closed Monday.

The Hardwick Police Department’s K-9 division and State Police Crime Scene Search Team assisted in investigating and processing the crime scene and the area surrounding Jenkins’ SUV. Ledo said on Monday the Federal Bureau of Investigation has also been called in to assist in the investigation and to acquire background information, Ledo said.

Anyone who may have any information regarding this case or may have traveled Goss Hollow Road on Sunday evening between the hours of 7 and 11:30 p.m. and along Comerford Dam Road is asked to contact the State Police at the St. Johnsbury Barracks at 802-748-3111.