Posted on May 8, 2014 by Patty Minichiello | Comments Off 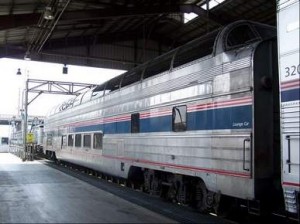 Children’s games and a unique rail car will roll into Rutland on Saturday as part of a national celebration of America’s rail system.Rutland joins 16 other municipalities around the country from 10 a.m. to 4 p.m. Saturday in celebrating National Train Day, an event promoted by Amtrak for the past six years. The passenger rail service chooses depots to host the event each year, and Rutland was picked along with such landmark stations as New York City’s Penn Station and Union Station in Chicago.Tom Donahue, Rutland Chamber of Commerce executive vice president, said the date was chosen to commemorate the driving of the “golden spike” that completed the transcontinental railroad at Promontory Summit, Utah, in 1869.“It was also said to be the first national media event, apparently,” Donahue said. “Amtrak calls it National Train Day and they are the main promoter of the event. However, this one happens to coincide with Vermont Rail System’s 50th anniversary.”To mark the occasion, a special locomotive, named “The 311,” will pull an excursion car. Donahue said that as of Wednesday, the two planned excursions were already full.“The upside is, the train will be coming in and out a lot, departing at 10 o’clock and departing at 2,” he said.This is on top of the daily train to New York City, which leaves at 11 a.m., which Donahue said will give rail buffs plenty of chances to see trains in motion. He said there will also be four pieces of train equipment on display.“There’ll be static displays, but you’ll be able to go and look at the inside of the trains,” Donahue said. “The most interesting piece is the great dome car.”The dome car, which sports a glass top that functions as a sun roof, is the only one of its kind in Amtrak’s fleet, Donahue said. He added that it was built in 1955, serving on the Chicago-Seattle Empire Builder, the Great Northern Railway and the Chicago, Burlington and Quincy Railroad.“For history buffs, this’ll be a rare piece of equipment to look at and go in,” Donahue said.A 30 foot-by-40 foot tent will house displays from groups ranging from the Rutland Historical Society to Omya. Children’s activities include a kids’ train that will travel around the parking lot.“That will be a big hit,” Donahue said. “It’s very colorful and fun-looking and the kids are going to love it.”The children’s section will also feature a rail depot based on the rail-centric British children’s series “Chuggington.”“They have a whole variety of activities around ‘Chuggington’ for the kids,” Donahue said. “Activity books, coloring books, a photo backdrop … a toy table. This has turned into a real family event.”It’s also a bit of a political event, with a roster of speakers led by Rep. Peter Welch, D-Vt. Also speaking are Vermont Secretary of Transportation Brian Searles, state Tourism & Marketing Commissioner Megan Smith, Board of Aldermen President David Allaire — who also serves on the Vermont Rail Council, Vermont Rail System President David Wulfson and Bob LaCroix, an Amtrak representative traveling up from Washington, D.C.gordon.dritschilo @rutlandherald.com