NRC officials to talk about Yankee

BRATTLEBORO — Officials from the Nuclear Regulatory Commission are coming to Vermont to talk about their annual safety assessment of the Vermont Yankee nuclear plant.
NRC officials will be on hand Wednesday to talk with members of the public one-on-one in what they’re calling an open house beginning at 5:30 p.m. on May 23 at Brattleboro Union High School.
Beginning at 7 p.m., they’ll convene a more formal public meeting where members of the public will be invited to ask questions.
The NRC says Vermont Yankee got good safety grades over the past year, with no issues presenting more than very low safety significance.

MONTPELIER — A federal appeals court weighing a water quality permit for the Vermont Yankee nuclear plant wants lawyers to provide it with written arguments on another type of water quality permit.
Vermont Public Service Commissioner Elizabeth Miller says that was one result from a hearing Wednesday before the U.S. Court of Appeals for the D.C. Circuit.
Vermont and the nuclear watchdog group New England Coalition went to that court to complain that the Nuclear Regulatory Commission improperly issued a license extension for the Vernon reactor last year because it did not have an updated permit under the Clean Water Act. Miller argued Vermont’s case.
She says the three-judge panel asked for arguments relating to a second permit also required under the Clean Water Act. Briefs are due in 10 days.

Multiple injuries in I-89 crash

Several people sustained serious injuries during an early morning crash on I-89 in Bolton this morning.

Interstate 89, southbound, in Bolton continues to have delayed traffic due to the crash, involving two vehicles, and it may take hours to clear the roadway.

A 911 call prompted first responders to rush to the scene near mile marker 70.

Bolton Fire responded and extricated at least one person in one of the cars.  Vermont State Police troopers from Middlesex Barracks, along with members of the Crash Reconstruction Team responded to the scene to investigate the crash. Employees from VTrans and the Vermont Division of Motor Vehicles are also on scene, helping with traffic control operations.

Traffic is being detoured around the crash scene starting at Exit 11 at Richmond; to Route 2 east to Waterbury; then back onto I-89 southbound. Emergency personnel are also directing traffic through u-turns to help alleviate the congestion.

The cause of the accident remains under investigation.

MONTPELIER — The Vermont Senate is set to debate a miscellaneous tax bill including a new $7.5 million tax on the Vermont Yankee nuclear plant.
Backers say the tax is needed to replace money that Vermont Yankee had been paying into state coffers to support renewable energy. The agreement calling for those payments ended March 21, the date the plant was originally set to shut down.
The plant is continuing to operate, and backers of the tax say it should end up with Vermont Yankee paying about what it did before.
Critics of the tax call it unfair and punitive. They point to ongoing litigation in federal court in which Vermont Yankee and its owner, New Orleans-based Entergy Corp., are trying to dodge the state’s efforts to shut the plant down.

A Vermont lawmaker travels to New Mexico this coming week for a look at a radioactive waste disposal site.
Rep. Sarah Edwards, a Brattleboro Progressive and member of the House Natural Resources and Energy Committee, is set to travel this week to the Waste Isolation Pilot Project near Carlsbad, N.M. Edwards says she wants to learn all she can about radioactive waste because some is being stored at the Vermont Yankee nuclear plant in Vernon, which is near her district.

More than 900 anti-nuclear protesters marched from downtown Brattleboro to the Entergy Nuclear corporate offices at noon Thursday to protest the continued operation of Vermont Yankee.

Many of the protesters were planning on civil disobedience at the corporate offices, which are about 3 miles from downtown Brattleboro.

The protesters took an oath of nonviolent protest before they left on the march.

Earlier this morning the offices were deserted and roped off and the building was surrounded by Windham County Sheriff’s Deputies.

From the Vermont Press Bureau: 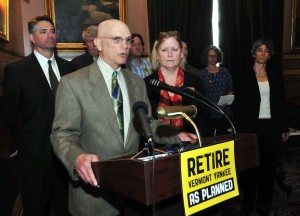 Rep. Tony Klein, D-East Montpelier, Chair of the House Natural Resources & Energy Commitee, speaks at a press conference at the Statehouse in Montpelier on Wednesday about his disappointment that Vermont Yankee remains open.

Dashed hopes and shattered dreams were on display at a Statehouse news conference Wednesday where lawmakers, environmental activists and representatives from some of the state’s most influential environmental groups mourned Vermont Yankee’s 40th anniversary.

They had hoped to be celebrating this spring day the final shutdown of the nuclear plant. Alas, ’twas not to be.

MONTPELIER — A top Vermont state official is questioning the Nuclear Regulatory Commission’s oversight of the Vermont Yankee nuclear plant.
Public Service Commissioner Elizabeth Miller wrote Thursday to the head of the NRC’s Northeast region to say she’s concerned about what she called a pattern of human errors at the Vernon reactor during the past 15 months.
Miller lists five errors, ranging from failure to remove a plastic cover from a pump before it was installed to inaccurately measuring the dose rate from a shipment of radioactive waste.
The NRC labeled all five incidents as minor, but Miller is questioning why they aren’t being considered as part of a pattern.

PSB: May not have authority to grant Entergy permit

Posted on March 9, 2012 by Darren Marcy | Leave a comment
MONTPELIER — The legal thicket that surrounds the continued operation of Vermont Yankee nuclear plant got thicker Friday.
During a status conference before the Public Service Board on Entergy Nuclear’s bid for a new state certificate of public good, it came out that the PSB believes it doesn’t have the authority to grant Entergy a needed permit to store additional nuclear waste at Vermont Yankee.
Friday’s session attracted a standing-room-only crowd at one of the largest meeting rooms at the Vermont Statehouse, as the quasi-judicial board, Entergy and various environmental and energy groups sorted through the various legal and permit issues still undecided.

Legal issues up in air as clock ticks for Yankee

MONTPELIER — With less than two weeks ago before the Vermont Yankee nuclear plant’s initial 40-year license period expires, questions remain about the plant’s future.
A recent federal court ruling sent back to the state Public Service Board the question of whether the plant would get a new state permit to operate for another 20 years. It won federal approval to do so about a year ago.
But the board recently asked lawyers for Vermont Yankee owner Entergy Corp., the state and anti-nuclear groups questions indicating there’s a possibility the plant might have to shut down on March 21.
The board has scheduled a hearing on the status of the plant for Friday.