News and events in and around Rutland City and Rutland Town, Vermont.

No charges yet in hit-and-run

Posted on April 16, 2013 by Patty Minichiello | Comments Off 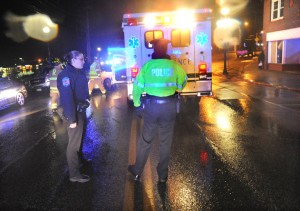 No criminal charges were filed Monday as police and state prosecutors continue to investigate a hit-and run-crash that killed a 71-year-old Mendon woman.

Monday marked the fifth day since Jane Outslay was killed after she was struck by a car while crossing Strongs Avenue on Wednesday night. At 1 p.m. Thursday, 53-year-old Christopher Sullivan, a former city attorney, identified himself as the driver and surrendered the 2004 Lexus sedan he said he was driving that night to police. Rutland Police Chief James Baker said Friday that the damage to the vehicle’s hood and windshield was consistent with an impact with a pedestrian.

Baker said Friday that the Rutland City and Vermont State Police detectives investigating the incident planned to meet early this week with prosecutors from the Vermont attorney general’s office, which is handling the case, to discuss possible charges.

No arrests yet in hit-and-run that killed woman

Posted on April 11, 2013 by Patty Minichiello | Comments Off

An ambulance at the scene of a fatal hit-and-run Wednesday night on Strongs Avenue.

Rutland Police have made no arrests in the hit-and-run killing of an elderly Mendon woman Wednesday night.

But an investigator in the case said Thursday afternoon that police are sorting through surveillance camera videos from a number of businesses on Strongs Avenue in a search for the vehicle that struck and killed 71-year-old Mary Jane Outslay.

END_OF_DOCUMENT_TOKEN_TO_BE_REPLACED

Casella to offer up to $20M in VEDA, New Hampshire bonds

The Rutland-based solid waste company said proceeds from the bond sales will be used to repay loans under its revolving credit facility for assets purchased in Vermont since Oct. 5, 2011.

Casella said it will guarantee the bonds with certain company assets.

In connection with the VEDA bonds, Casella also announced its intention to offer up to $5.5 million of Business Finance Authority of the State of New Hampshire solid waste disposal revenue bonds.

The company also said it may offer an additional $5.5 million in BFA Bonds.

Casella said proceeds from the sale of the New Hampshire bonds will be used to repay borrowings under its revolving credit facility for assets purchased in New Hampshire since Oct. 5, 2011.

The exact terms and timing of the bond offerings will depend upon market conditions and other factors.

The bonds are being offered only to qualified institutional buyers.

RUTLAND — Award-winning author Chris Bohjalian will discuss the writing of his latest novel in a talk at Rutland Free Library on Wednesday, March 6. His talk, “Fiction’s Getting to the Truth: Chris Bohjalian’s ‘The Sandcastle Girls,’ Family History, and Armenian Genocide” is part of the Vermont Humanities Council’s First Wednesdays lecture series and takes place at 7 p.m.
A story of genocide in Armenia, “The Sandcastle Girls” was published in 2012 to great acclaim, making several national bestseller lists.  Bohjalian has called it the most important book he will ever write.
All First Wednesdays talks are free and open to the public. For more information, call the Rutland Free Library, 773-1860, or email: [email protected]

Steve Earle & The Dukes coming to the Paramount

RUTLAND — Rutland’s Paramount Theatre has added Steve Earle and The Dukes to its lineup at the historic stage for an 8 p.m. Saturday, April 27, concert.
A protégé of legendary songwriters Townes Van Zandt and Guy Clark, Earle quickly became a master storyteller in his own right, with his songs being recorded by Johnny Cash, Willie Nelson, Emmylou Harris, Waylon Jennings, Travis Tritt, The Pretenders, Joan Baez and countless others.
Tickets are $39.75 (plus tax); call 775-0903, or go online to www.paramountlive.org. More information about Earle is available online at www.steveearle.com

The Rutland Free Library will host a forum on Rutland’s water at 6:30 p.m. tonight.
The discussion, titled “Rutland Water — Future Options” is sponsored by Rutland Citizens for Clean and Safe Water.
A nonbinding resolution on the town meeting ballot asks Rutland voters if they approve of the use of chloramine in the water system. In November, voters rejected a $5.5 million bond for a new filter system that would have eliminated the potential need to switch from chlorine to chloramine as a disinfectant.

Vyto Starinskas / Staff Photo
Rutland City firefighters prepare to battle a fire in a garage that houses a gun shop behind a home on Elm Street in Rutland on Tuesday. Smoke could be seen and throughout the downtown area.

Fire crews are responding to a 3-alarm fire at a gun shop on Elm Street, and are using precautions because of the likelihood of ammunition stored in the shop.

Donna LaRose, who lives across the street, was alarmed to see the fire in the shed behind King’s house a little before 8 a.m.

Other neighbors knocked on the door to the Kings to warn them, and multiple fire engines responded to the street and began to set up hoses with precautions taken because of the threat of ammo in the building.

According to Mayor Christopher Louras, who walked down to check on the fire, the precautions were part of a protocol followed by the fire department in these cases.

According to neighbors, King’s gun shop has been in business around 40 years; the owner, Gerald King, lives in the house adjacent to the shop, which is housed in a shed to the rear of the house. King is retired, but still does some work on guns.

McKibben speaks in Rutland: “It seems to be common sense…” 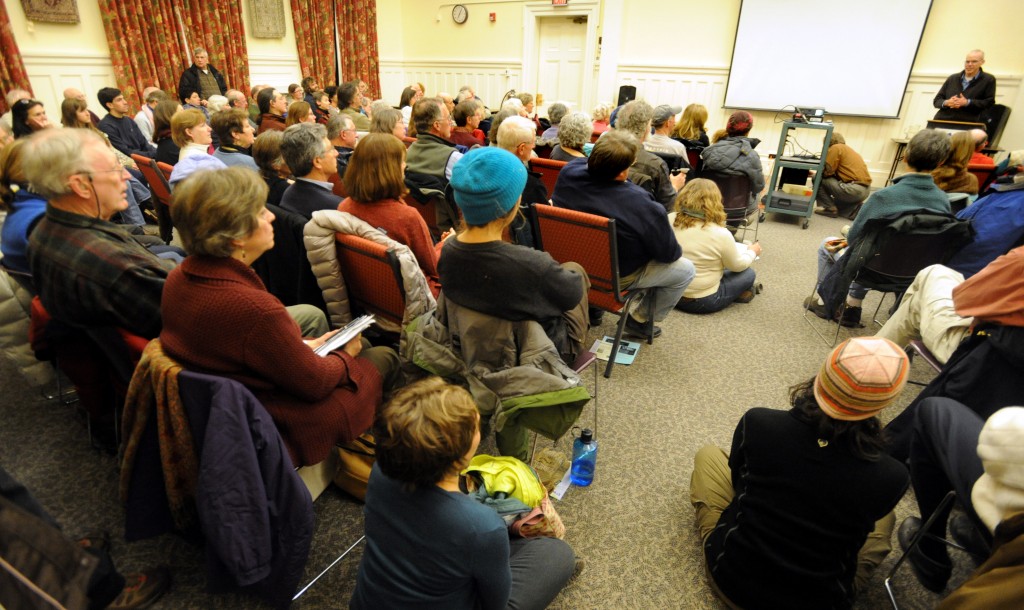 By Lucia Suarez | STAFF WRITER
Vermont environmentalist Bill McKibben used a talk Wednesday night in Rutland as a way to motivate local Vermonters to join his cause against fast-working climate change.
The founder of the grassroots organization 350.org spoke to more than 130 people overflowing the Fox Room at the Rutland Free Public Library about the basic science and policies behind climate change and why more needs to be done — and quickly.
“To me none of it seems controversial,” said McKibben as he started speaking. ”It seems to be common sense. … It’s almost like they are daring me to say something controversial.”
McKibben said over the past 25 years or so, fossil fuel consumption has helped warm the planet by one degree Celsius — enough to melt the arctic and break the old records in temperature as well as the frequency and severity of natural storms.
“(Last year) in Vermont we watched with trepidation that hurricane that went through New York,” McKibben said. “It slammed into one of the biggest, most diverse cities in the world. It gave you a different sense about the fragility of the society we have created. … In the old world you could not have a Hurricane Irene in Vermont.” END_OF_DOCUMENT_TOKEN_TO_BE_REPLACED 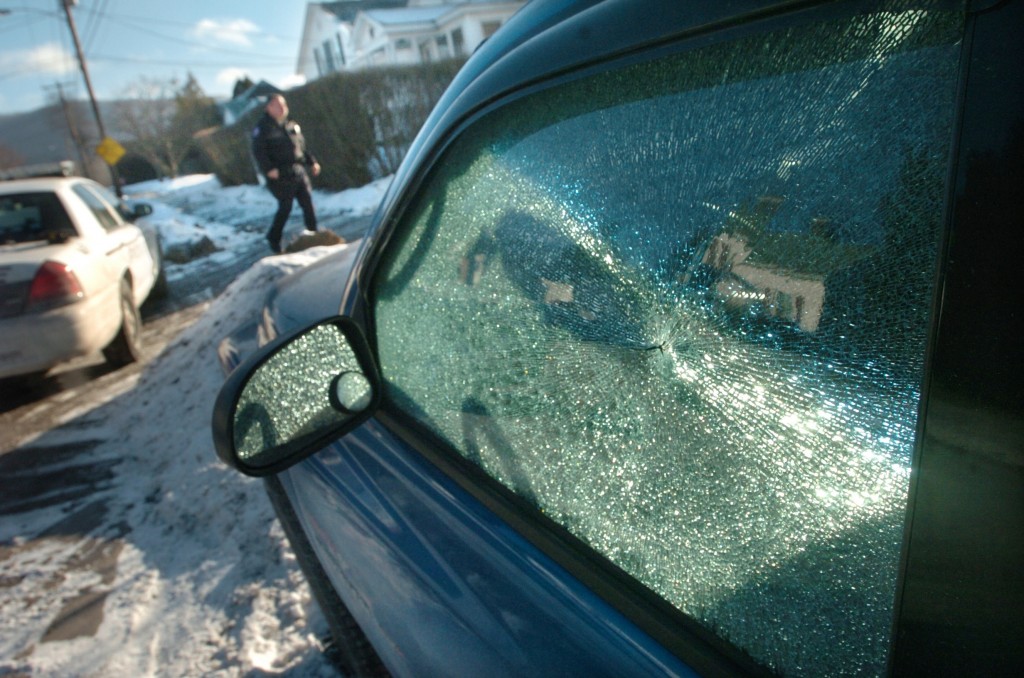 Vyto Starinskas / Staff Photo
One of the many car windows that were smashed or broken in Rutland.

Rutland Police have announced three arrests in the case of multiple broken windows and acts of vandalism around Rutland in the last few days.

Jacob Eells, 18, of West Rutland, Cade Bowen, 17, or Castleton, and Cody Vanguilder, 17, were arrested on Jan. 24, and charged with multiple counts of unlawful mischief according to Det. Sergeant Kevin Stevens of the Rutland Police Department. The investigators found BB guns which were used during the vandalism.

All three teens have been cited to appear in Rutland Superior Court on Feb. 4 to answer the charges of multiple counts of unlawful mischief.