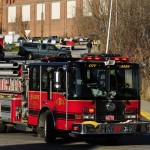 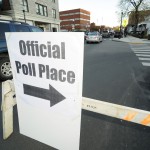 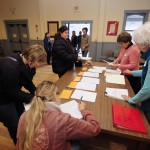 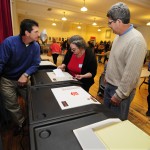 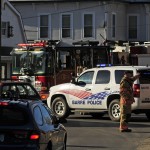 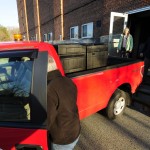 ‘It’s hard to choose because of all the negative ads’

Vermont National Guard Staff Sgt. Douglas Bordeaux of Duxbury, said as a full-time supply technician in Colchester, voting for Mitt Romney probably would have helped him have a job a little longer. But he didn’t know which candidate he could trust, he said. So he didn’t vote for either major party candidate for president, he said.

“It’s really hard to choose, and it’s because of all the negative ads,”  he said after voting for a third party candidate.  “And as it gets closer and closer to the election, it gets worse and worse.”

BARRE — City Manager Steve Mackenzie described the situation as “stable,” but said it would likely be at least until early evening before the problem had abated. He said a 70 percent concentration of gas was measured in the building - a vacant apartment house on Bugby Avenue that was the subject of a “no rent order” due to “significant code violations” that were detected by city inspectors.Mackenzie said it was unclear how much of the city was initially affected by the emergency decision to cut power to the area, but said he suspected a “significant portion of the north end was at least briefly without electricity. He said Green Mountain Power personnel had responded and planned to restore power to all areas that were not in the immediate vicinity of the leak.
The shift in polling places was predictably chaotic given the need to move election workers, voting machines and ballots from the Auditorium to the labor hall, By 3:30 p.m. The new polling place had been established, the first ballots had been cast and City Clerk Carol Dawes was exploring the possibility of extending voting hours due to confusion that coul prevent people who waited until the last minute from voting. Dawes was not optimistic that the hours could be extended, but was attempting to contact the Secretary of State’s office for confirmation.

MONTPELIER – The polling station in Montpelier’s City Hall opened seven minutes late due, in part, to what City Clerk John Odum says was an “unprecedented amount” of voters first thing in the morning.
Odum said City Hall averaged about 600 to 700 voters per hour the first two hours after polls were open around 7:07 a.m. The lines were so long that the voting machine was having issues accepting ballots and Odum said he had to pull out the backup machine. Odum said some voters had to wait around 20 to 25 minutes before casting their ballots as the polls opened.
With the emergency voting machine in use, the city is operating without a safety net, Odum said, and if the system goes down then the city would be in trouble.
Turnout for the Capital City reached 60 percent, including over 1,300 early votes cast, by 11:30 a.m. Tuesday according to Odum, but the the large amounts of voters slowed down by 9:30 a.m. Odum said he expects the remainder of the day to go by easier because the city is simply “running out of voters” since so many already voted.
Odum became city clerk in March and although he handled the primary election in August, he described Tuesday’s election as a “trial by fire.”
Besides the large amount of voters, Odum said other reasons for the seven minute delay were not having enough pens, needing to put up more signs directing voters where to go and poll workers being sworn in late. He said he also brought in a couple more justices of the peace to help out with voting.
Even though he is new to the job of city clerk, Odum said as a voter in Montpelier he has seen nothing like the amount of people trying to vote Tuesday morning.
“It was rough,” Odum said.

The Barre City polling place has moved to the Old Labor Hall,  due to a propane leak on Bugbee Avenue, which prompted a citywide power shutdown.  The order to evacuate came from the Secretary of State’s office, according to city officials. Despite the restoration of power to much of the city - it had been shut off as a precaution while the major propane leak was secured - the polling place will remain moved to the Old Labor Hall, officials said.

The emergency change of venue was not well received by one Barre resident – an Obama voter – who parked on Merchant Street and walked across the expansive parking lot at the Barre Civic Center complex to cast her ballot at the Auditorium. “I’m not going to bother to vote, to hell with it,” Donna D. Holden said after learning she would have to walk back to her car and then drive to the Old Labor Hall and vote there.

Voting got off to a fast start in the Granite City on Tuesday, though the initial wave only lasted about 20 minutes before settling into a steady, but manageable flow of voters at the Barre Municipal Auditorium.

“The first 20 minutes were crazy,” City Clerk Carol Dawes said, while undertaking the tedious task of opening and separating absentee ballots. That turned into an hours-long effort due to the sheer size of the stack. Dawes received more than 850 requests for absentee ballots in the run up to the elections and each envelope contained two ballots – one asking voters to express their preference for everything from president of the United States to local justices of the peace, and the other seeking approval for a $3 million roof replacement project at Spaulding High School.

The latter question is one that will be jointly decided by voters in Barre and neighboring Barre Town. According to Dawes, the stack of absentee ballots isn’t quite as thick as it was four years ago when more than 1,100 Granite City voters cast their ballots early in the presidential race. Still, there was a long line when the polls opened today and more than 275 ballots were cast in the first hour. That figure jumped to just over 450 by 9 a.m. and by noon the count stood at just over 1,325 voters. By 2:30 p.m. the count had risen to 1,800 ballots, including some of the absentee ballots that had started to be fed into the machines.

There are roughly 6,700 registered voters in Barre. In addition to the roof project, voters will settle a three-way race for two local legislative seats. All three candidates – Rep. Paul Poirier, I-Barre, Rep. Tess Taylor, D-Barre, and Republican challenger John Santorello – spent the day at the polls. This year, for the first time in modern history, the legislative seats will be filled in citywide elections. In past years, the city has been divided into separate single-member districts. That changed due to Census-driven reapportionment this year.

BERLIN – There were short lines and some waiting in the first few hours of voting in Berlin today where the fate of a non-binding referendum involving Berlin Pond was credited for a surge in early voting this year. “There were some people who voted absentee that I have never seen vote in a presidential election before,” Town Clerk Rosemary Morse said, suggesting the heightened interest could be traced the months-long debate over recreational use of a pond that serves as the drinking water supply for all of Montpelier and a portion of Berlin. According to Morse, roughly 375 local residents voted absentee – up roughly 175 from the 2008 election – and while lines were manageable today, the parking lot outside the municipal office building was packed in the early going as a steady stream of voters turned out to cast ballots. END_OF_DOCUMENT_TOKEN_TO_BE_REPLACED

Bipartisanship in Springfield: John Campbell went to Dunkin Donuts and bought coffee and donuts for all the people out waving signs, including Republicans… there’s not much else going on.

Voters seem to be more concerned about the economy and jobs that Brattleboro did - where voters were more forthcoming about social issues. One man said he’d been laid off in February, and was not optimistic that the political process would lead to any long-term solutions.

Kevin is off to Randolph next.

From reporter Kevin O’Connor, who is traveling across the state today interviewing voters at the polls:

In Brattleboro, polls opened at 9 a.m.; there were about 100 people lined up outside the high school before opening. About 2,000 of the town’s 8,800 voters have already voted early. All three districts vote at the high school.

One woman brought her cat in a cat carrier, because she had just gone to her vet. The cat is 20 years old - old enough to vote, she said.

In general people were coming out for the presidential race, they said, and while their enthusiasm is down from four years ago, the Obama supporters in line were saying he deserved another 4 years.

MONTPELIER — A retired lawyer from Plainfield and a Norwich University faculty member who is a Washington County State Senate candidate expressed their concerns Friday and Saturday, in emails to Vermont Secretary of State Jim Condos, over the possibility of electronic voting problems on Election Day.

Alexandra Thayer, the Plainfield lawyer, and Norwich technology professor Jeremy Hansen both sent emails to the Secretary of State’s office, offering recommendations to ensure that checks and balances are in place for any issues with optical scanner memory cards and Accu-Vote tabulators.

Condos said he thought most of the recommendations were already being implemented by the state. He also said the concerns were brought to his attention with fewer than two business days remaining before the election, and he questioned why the issue wasn’t addressed sooner. END_OF_DOCUMENT_TOKEN_TO_BE_REPLACED

Posted on November 5, 2012 by Rob Mitchell | Leave a comment

By WILSON RING | The Associated Press
MONTPELIER — Vermont’s top election official said Monday he expected about 70 percent turnout on Election Day, and urged all eligible Vermonters to vote.
“Your vote is your voice,” said Secretary of State Jim Condos, whose office is overseeing the election.
In addition to voting for the president of the United States, the governor, a U.S. senator, the state’s lone representative to the U.S. House, voters across Vermont will also elect 150 members of the state House of Representatives and 30 members of the state Senate on Tuesday.
Vermont has about 461,000 registered voters, Condos said. He expects about 323,000 of them to head to the polls on Tuesday.
The opening of polling places varies by town, but all must be open by 10 a.m. Polls close at 7 p.m.
Weather should not be a factor on Tuesday.
President Barack Obama is expected to add Vermont’s three electoral votes to his column with ease.
Gov. Peter Shumlin, a Democrat, is being challenged by Republican state Sen. Randy Brock.
U.S. Sen. Bernie Sanders, an independent, is being challenged by Republican John MacGovern. U.S. Rep. Peter Welch, also a Republican, is being challenged by Republican Mark Donka, a Woodstock police officer.
Retired Middlebury College Political Science Professor Eric Davis says the top-of-the-ticket incumbents are expected to win easily.
In other races, incumbent Lt. Gov. Phil Scott, a Republican, is being challenged by Cassandra Gekas, running as a Democrat and a Progressive. Incumbent Democratic Attorney General William Sorrell is being challenged by Republican Jack McMullen and Progressive Ed Stanak. Democratic Secretary of State Jim Condos has no major-party challenger.
Probably the hardest-fought statewide race is for state treasurer, which pits incumbent Democrat Beth Pearce against Republican Wendy Wilton.
Currently, the 150-member state House has 94 Democrats, 48 Republicans and 8 independents and Progressives. The Senate has 22 Democrats (the number includes one member who describes himself as a member of the “Progressive-Democrat fusion ticket” and another who ran as a “Progressive-Democrat-working families” candidate) and eight Republicans.