BURLINGTON — A Hinesburg man released to a drug rehabilitation program after being charged with operating a methamphetamine lab is back behind bars after being kicked out of the rehab program.
Citing court records, The Burlington Free Press (http://bfpne.ws/TFjVUU ) reports that 19-year-old Jacob Berino was arrested after being dismissed from the Valley Vista rehab center in Bradford last week for non-participation.
A federal magistrate has ruled Berino should be held until his criminal case is resolved, but said he would reconsider if an intensive treatment program is found.
Officials say Berino has been charged with eight crimes since July, most of them tied to what his mother calls a “horrible drug problem.”
Berino was seriously burned in October during an explosion at what authorities called a secret drug lab.

MIDDLEBURY — Happiness, song and food are part of any holiday, and fifty local children and teenagers bring them together for “Eat Up! A Lip-Smacking Musical Treat,” the second annual holiday entertainment that will be performed at Middlebury’s Town Hall Theater at 7 p.m. on Friday and Saturday, Dec. 14 and 15.
The THT Young Company show choir carries the bulk of the narrative, which is loosely based on the tale of Hansel and Gretel. They sing and dance to standards, holiday favorites and Broadway show tunes, combining middle and high school students.
Twenty 8-11 year olds are part of the Improviso class that have been developing a libretto to underscore the drama of the story. The littlest actors-in-training, ages 5-8, will perform as the gingerbread children.
Tickets are $10, $5 for children 12 and under; call 382-9222, or go online to www.townhalltheater.org.

Police are looking for information about a residential burglary that happened between 8 a.m. and 1:30 p.m. on Loven Lane in Ferrisburgh on Tuesday. The victim reported that a large clear blue glass water jug that was holding money, two pearl stud earrings set in sterling silver, one pearl dangling earring set, a set of turquoise custom earrings, several gold and silver chains and a cream-colored Egyptian cotton pillow case.

Hight hilltops are turning color as the foliage season is just starting to erupt.

According to the VT Department of Tourism: “Rutland County Forester Chris Stone notes Route 103 is revealing 5-20 percent early stages. Stone says trees are just starting to lose some green and hints of yellow and orange are starting to show at higher elevations. Some scattered individual red maples are turning at higher elevation wetlands. While the color has yet to really show, there is a hint of fall on the hillsides.

Your best bet to see foliage as it begins are in the higher elevation areas in the northernmost regions  that will offer the most panoramic views of emerging color across the valleys. Many low-lying marsh areas will offer some of the most vivid and varied early season change. Route 108 through Smugglers’ Notch between Stowe and Cambridge is showing color, as are Routes 242 and 100 near Jay Peak; plus Routes 16 and 5A in the Lake Willoughby area. The Worcester Range and Mount Elmore along Route 12 north of Montpelier are tinged with early color, as are views from Route 14 in the Hardwick and Craftsbury region.

Sam Schenski, the Windham and Windsor County Forester also suggests Rt. 106 through Perkinsville; Tyson Rd. from Reading to Plymouth and East Hill Rd. in Andover – all of which, he notes are in early stages of foliage.

Posted on September 10, 2012 by Cristina Kumka | Leave a comment

Aerial spraying for mosquitos carrying the deadly virus eastern equine encephalitis that has killed one Brandon man and hospitalized another was completed Friday night at about 9:20 p.m., according to the state Health Department.

Karen Emerson lives above Brandon Town Hall and said she heard five flyovers Friday night but the state decided to not spray her neighborhood, and lucky for her, she said, not her half-acre biodynamic, pesticide-free garden.

“The health and agriculture departments wanted to avoid residential areas,” said Emerson, who had been in regular contact with health officials before the weekend out of concern for her garden, which she eats from.

State officials declared an imminent health risk for the Brandon/Whiting area last Saturday, days before Brandon’s Richard Hollis Breen died from EEE, a rare but deadly virus hosted by a species of songbird and spread by mosquitos that feed on them.

The type of mosquito that carries EEE normally doesn’t feed on humans but it has and another man from Sudbury remains sickened with the virus, that infects only about six people a year in this country.

The mosquitos not killed by the pesticide spray won’t die until the first freeze.

Emerson took precautions Friday night to protect her crops from residual spray from the nearby spray area, all along Brandon’s Grove Street.

She harvested all the vegetables she had left growing and put drop clothes over the plants.

Those clothes were sticky after the spray, but she said, she noticed the pesticide broke down pretty quickly after it rained.

Still, she’s taking even more precautions to prevent any effects on her garden, she said, from carcinogens that were in the pesticide.

She’s doing her own spraying - a biodynamic flush to rid her garden of any remaining pesticides.

Posted on September 8, 2012 by Vermont Today Editor | Leave a comment 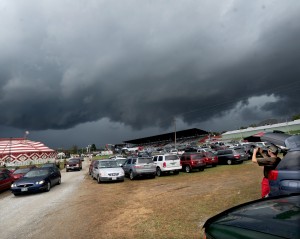 RUTLAND — A tornado watch was posted in Vermont as a late-summer storm blustered up the East Coast on Saturday.
The storm, actually a line of storms which stretched from Quebec to Virginia, moved into Vermont around 5 p.m., with gusting wind and heavy rains, leaving more than 9,000 utility customers without power from St. Albans to Bennington.
The heavy rain disrupted the South End Art Hop in Burlington, the Vermont State Fair in Rutland, and numerous other public events statewide.
At the Vermont State Fair, a public address announcement asked people to get in their cars or get inside as the dark line of clouds loomed over the Taconic Mountains to the west.
Officials made fairgoers waiting for Scott McGreevy’s performance stand up against the grandstands so they did not have to lose their place in line. The rain swept through and
The Rutland High School girls’ soccer team was caught by the storm while returning from a game against CVU, and had to use garbage bags to catch the water leaking into the bus.
In Manchester, the Jay Hathaway Memorial Half Marathon and 5k went off in muggy weather Saturday morning without a hitch, but by 6 p.m. the town, along with Arlington and Sunderland, had more than 1,000 homes without power, according to Green Mountain Power.
No watches had been issued in Maine or New Hampshire Saturday afternoon, the National Weather Service said. But high surf advisory was in effect until Sunday evening along beach areas of New Hampshire. The high surf advisory extending into Maine also included threats of lightning strikes.
But southern portions of New England — western Connecticut and Massachusetts — did have tornado watches.
In Maine, forecasters said thunderstorms packing high winds could hit much of the state. Meteorologist Tom Hawley said New Hampshire couldn’t rule out a severe front moving through about midnight.
“I will be shocked if any points east of the Penobscot (River in eastern Maine) will get severe weather,” Hawley said.
In New York City on Saturday, a tornado hurled debris in the air and knocked out power.

This video was shot from the top deck of the Rutland parking structure on Saturday afternoon, as a line of thunderstorms moved into the area.

Police say a 25-year-old Burlington man is now facing a charge of second-degree homicide in connection with a fight that resulted in another man’s death.

State police said Sunday that Joseph Bolduc of Burlington will be arraigned this afternoon in Rutland criminal court.

Besides the homicide charge, he’s charged with driving under the influence, leaving the scene of an accident, driving with a suspended license, resisting arrest and attempting to disarm an officer.

Police say Bolduc was one of several people involved in a fight at a bonfire in Ferrisburgh shortly before midnight Friday.

Forty-year-old Conrad Bell of Vergennes died as a result of his injuries.

Officials say an autopsy has been completed and investigators are waiting a report from the medical examiner on the cause and manner of death.

The Associated Press contributed to this report.

A 28-year-old Ohio woman who jumped from the cab of a moving tractor trailer in Benson Friday was pronounced dead Saturday.

The body of Elizabeth Lyons was transported to the Office of the Chief Medical Examiner for autopsy.

Lyons was in critical condition Friday night after jumping from the cab of a moving tractor-trailer truck on Route 22. Lyons, of Lynchburg, Ohio, was taken to Fletcher Allen Medical Center in Burlington Friday.

Police said she was a passenger in a truck driven by 51-year-old Robert Simpson, also of Lynchburg, Ohio, when the incident took place at 1:30 a.m. Friday.

Simpson told police he was driving north on the rural highway when Lyons opened the door and said she was going to jump out. Simpson said he was rounding a curve in the road when Lyons leaped from the vehicle.

The driver said he stopped to search for her, without success. Officers responding to the scene found her lying on the side of the road with a severe head injury, police said.

A Vermont State Police detective was called to investigate the incident.

Members from the Vermont State Police Bureau of Criminal Investigations continue to investigate the incident. At this time, the investigation is on-going, according to police.

State police said a trooper saw 27-year-old Andrew Leonard of Addison riding his motorcycle at 114 mph on Interstate 89 in Williston at about 1 p.m. Saturday.

When Trooper Adam Marchand attempted to pull over Leonard, he refused to stop and proceeded on Interstate 189 and then onto Route 7, before returning to I-89, where his speed topped 120 mph.

Police said Leonard eventually exited the interstate and made his way down a dead-end road in Essex, where he rode into the woods before losing control of his motorcycle.

He was arrested following a foot chase and charged with grossly negligent operation, excessive speed, attempting to elude and violating furlough.

Posted on June 6, 2012 by Vermont Today Editor | Leave a comment

VERGENNES — Self-described as a band that plays “Bluegrass for people that hate bluegrass,” Barnstar! is a super-group of some of the Northeast’s best folk, country and bluegrass players whose scrappy, vibrant sound should actually please most everybody. They’ll be playing for the first time in Vermont at the Vergennes Opera House at 8 p.m. on Friday, June 8.

The band features Mark Erelli, Zack Hickman, Charlie Rose, Jake Amerding and Taylor Amerding (an alumnus of the local Bluegrass Gospel Project). These guys only play together a few times a year – so this is surely a concert not to be missed.